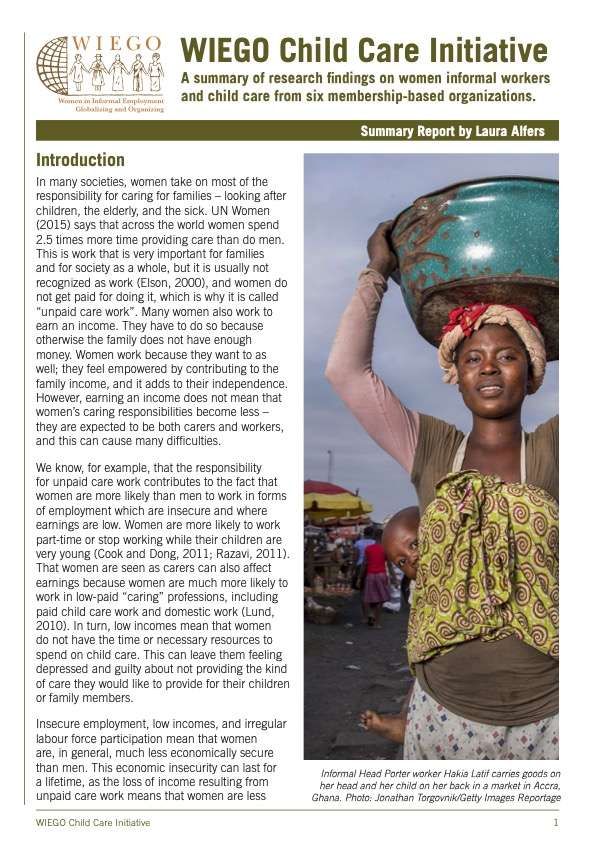 In many societies, women take on most of the responsibility for caring for families – looking after children, the elderly, and the sick. UN Women (2015) says that across the world women spend 2.5 times more time providing care than do men. This is work that is very important for families and for society as a whole, but it is usually not recognized as work (Elson, 2000), and women do not get paid for doing it, which is why it is called “unpaid care work”. Many women also work to earn an income. They have to do so because otherwise the family does not have enough money. Women work because they want to as well; they feel empowered by contributing to the family income, and it adds to their independence. However, earning an income does not mean that women’s caring responsibilities become less – they are expected to be both carers and workers, and this can cause many difficulties. We know, for example, that the responsibility for unpaid care work contributes to the fact that women are more likely than men to work in forms of employment which are insecure and where earnings are low. Women are more likely to work part-time or stop working while their children are very young (Cook and Dong, 2011; Razavi, 2011). That women are seen as carers can also affect earnings because women are much more likely to work in low-paid “caring” professions, including paid child care work and domestic work (Lund, 2010). In turn, low incomes mean that women do not have the time or necessary resources to spend on child care. This can leave them feeling depressed and guilty about not providing the kind of care they would like to provide for their children or family members.
Download